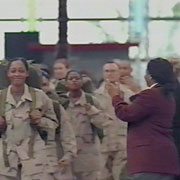 USA Today ran their annual "Ad Watch" of the ads that ran during last night's Super Bowl this morning, and though many commercials were pretty lame to begin with (was I the only one that thought the Subway steamed windows commercial was simply pathetic?), there were some major standouts.

The biggest standout for many was the Anheuser-Busch ad honoring soldiers returning home to spontaneous applause in an airport (View the ad at A-B's "Hero Salute" site). Many leftist blogs are decrying that ad, along with the NFL's salute to the troops prior to the start of the game, and comparing the overall sentiment and feeling to...(c'mon, say it with me)...Nazi Germany in 1936.

Other stand-out ads included the Bud Light ad featuring a skydive instructor tossing a six-pack out of a plane as an enticement to a reluctant diver -- only to have the pilot take off out of the plane after it.

Super Bowl first-time advertiser (and halftime show sponsor) Ameriquest ran two ads, the first featuring a man on a cellphone getting beaten into submission by the proprietors of a convenience store after they mistakenly overhear the man say "You're being robbed." The second featured a man fixing dinner for his wife, and picking up the cat that had knocked over a pot of tomato sauce...while holding a butcher knife in the other hand, as the wife (or girlfriend - it could have been either one) walked into the apartment.

The usual round of upcoming motion picture ads were present, and included new footage for Batman Begins, Sahara, and War of the Worlds. I was surprised that neither Star Wars Episode III nor Fantastic Four were represented last night.

Overall though, the ads were pretty dismal as compared to past years -- good thing there was a fairly exciting game to balance them against.

iFilm has collected all the ads together for you to watch online.

A gauzy valentine to American troops, which ended with the Anheuser-Busch corporate logo superimposed on screen, was touching, but some viewers may have wondered whether "Busch" had been misspelled.

Leave it to the Times to let their biases show, even in discussing something as basic as a Super Bowl in a business article.

Update 2:GoDaddy.com CEO Bob Parsons reports on his own blog that Fox yanked their second scheduled ad last night, at the behest of the NFL.

As you may have noticed our Super Bowl ad only appeared during the scheduled first quarter spot. It was scheduled to run also in the second ad position during the final two minute warning. Our ad never ran a second time. Instead, in its place, we saw an advertisement promoting "The Simpsons."

The NFL persuaded FOX to pull our ad.

We immediately contacted Fox to find out what happened. Here's what we were told: After our first ad was aired, the NFL became upset and they, together with Fox, decided to pull the ad from running a second time. Because we purchased two spots, we were also entitled to a "Brought to you by GoDaddy.com" 5 second marquis spot. They also chose to pull the marquis spot.

Their ad can be seen as part of iFilm's Super Bowl ad roundup.
(More coverage from Michelle Malkin, Wizbang, In The Bullpen, Pink Flamingo, Florida Cracker, Tempus Fugit, and others)

1 SuperBowl is a huge opportunity to see how much you can win from advertising. asigurari de viata